About AraPacis AraPacis, driven by the original vocals of Scots singer Michelle Macpherson, the versatile guitars of Jerry Fielden and the keyboard wizardry of  David Stone (ex-Rainbow and ex-Max Webster,) was formed in early 2003 with the goal of recreating some of the original aspects of the 70s era's hard rock and progressive music and allying it with a 21st century prog metal/doom metal/metalcore feel, to make an interesting hybrid. We have played shows such as the Hard Rock Cafe Montreal, MQ Musicfest Toronto, Hellfest Lanaudière, Camping Metal @ Fullpadge, and shared the stage with Blaze Bayley, Uli Jon Roth, Anvil, The Agonist, Raven, Doro, etc. Our debut CD "So Many Leapers" came out in April 2006, our 2nd one "Consequences of Dreams" came out in October 2009 and our third one, "Netherworld", in February 2012. We released an EP in March 2013, called "Déjà-vu". The CD "A Disturbing Awakening," our 4th album, features the playing on the song "Tearing the Mist" of  Deep Purple keyboardist Don Airey and was released in December 2014. The CD "System Deceive", our fifth, featuring the playing of Raven bassist John Gallagher throughout, came out in April 2016. Our sixth album "Obsolete Continuum," featuring the drums of ex-Black Sabbath drummer Vinny Appice on the single "Translucidity" and our 2nd EP "Déjà Doom" came out in 2018. We released our seventh album "Paradox of Denial" in September 2019, our 3rd EP "Déjà Hard" in 2020 and our 8th album "Waterdog" in 2021. 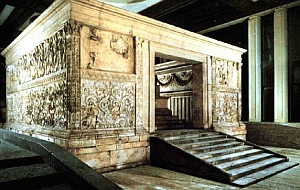 What is the Ara Pacis? Here are a couple of links to explain about this famous monument of Ancient Rome:

BACK TO THE HOME PAGE